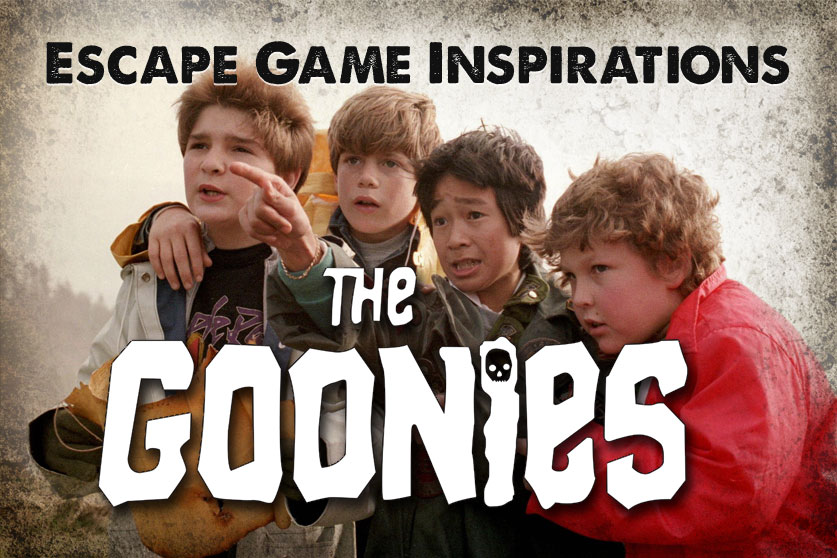 We all have those movies from our childhood that we really don't remember when we first saw them. For me, they are: The Raiders of the Lost Ark, Star Wars, and, The Goonies. I have those movies basically memorized. In a way, they are a part of me now. I really do not remember a time when I could pick up anything that resembled a sword and not hear "I am your father" in my brain. Or any time I was running down a hallway and didn't imagine I was dodging invisible poison darts. These movies and several others have a high place in my childhood memories.

All of these stories centered upon adventures. The one that embedded itself in my memories the most was, The Goonies. From the Rube Goldberg gate opener to the crazy pirate booby traps, that movie was pure adventure candy. I probably burned a hole in the magnetic tape of that VHS copy I had, I watched it so many times. I love that my kids also hold it in such high regard. Now that I am older and have little ones, I do question their choice in the use of profanity and toilet humor but those were simpler times.

I think one of the reasons this movie resonated with me, was I was the age those kids were when it came out. Gosh, I don't even think I saw it in the theaters. A quick Google search and I found I was probably 11 when I first saw it. Age aside, I identified with many of the characters. I had the thirst for adventure like Mikey, the crazy inventions of Data and the sarcastic attitude of Mouth. In retrospect, almost everyone could identify with at least one of the characters. I believe we all have a thirst for adventure at our core. This movie is just another avenue for us to live out our dreams of finding a dusty old treasure map and going on a grand journey for "rich stuff".

The part of the movie that comes out in my game designs the most are the crazy booby traps that forced the kids to work together and make use of everyone's strengths. If you have not seen the movie, you should stop here. I am going to ruin it for you. Spoilers Ahead. The booby traps were basically escape room puzzles. Each one had to be defeated or solved to progress before the time ran out (the fratelli's caught up to you). I wish I could design an element in our rooms that created a sense of urgency in our players that the crazy Fritelli brothers shooting at them would provide. Then again, people already freak out enough by a clock in the corner of the room ticking down. Plus, I am pretty sure those chumps are still in jail.

The map, the coin and the skull amulet were all clues to these puzzles. Some gave them insight, while others served as keys. As a game designer, we love locks. I get all excited when I think up an unorthodox lock. I have seen so many Master locks in escape rooms that I think our industry must be keeping them in business. Even the cool directional lock is getting pretty contrived. We need locks like the locks in the Goonies. That skull amulet key was freaking awesome. I will never rip that idea off because if I saw that exact thing done in an escape room I would roll my eyes so hard it would probably pull a muscle. What I am saying is, creative locks and keys are fun. We need more of them.

The bone organ was another escape room puzzle. This puzzle required players to rely on the strength of one of the other players. This is an essential team building lesson we all need to learn. We need to be able to leverage everyone's skill set in the group. The bone organ needed a person with musical talent. Seriously, I would have died if I was in there alone. I have no musical talent. I can build a robot to play the drums but I still need the midi data from an actual musician to make it sound descent. I tried one time to save money making my own game soundtracks in fruity loops on the computer. It was a dark time for my player's eardrums. The Goonies needed Andy to play the pipes like I need our composers to make our game soundtracks. We need each other. I like how the bone organ brought out that trait in the heroes of the story. The requirement for a specialization like that is not a big hit with escape room goers. We usually have to make puzzles which do not require special knowledge not easily gained. I will never require someone to be able to play a 200 year old piece of sheet music etched on the back of a ratty old piece of paper. Not to mention, said music played on an instrument made of dead people. Most people can't even play the recorder. I sucked at that class in school. I am not one to add many musical puzzles to our escape rooms but I have been to some rooms that do it very well.

That movie was littered with metaphorical escape rooms. Even the pirate ship at the end had an escape room feel to it. I love the dynamics of that scene. It was not really a puzzle per say, it was a lesson. The room rewarded the people who respected the pirates and punished the people who were greedy. I have to work that in to a room some day.

In the end, the Goonies personified shared adventures we all crave. An adventure is fun, but shared adventures are more than the sum of all their experiences. The last thing that engrained that movie into my childhood was the friendships we all experienced. Adventures that are shared build bonds that last forever. We all have this need to connect in this disconnected world. We need an adventure experience to share. We all need a chance to escape from time to time with our friends and loved ones. Escape rooms provide a quick adventure for all of us to experience together. It is a great time to be a Goonie. Goonies Never Say Die!