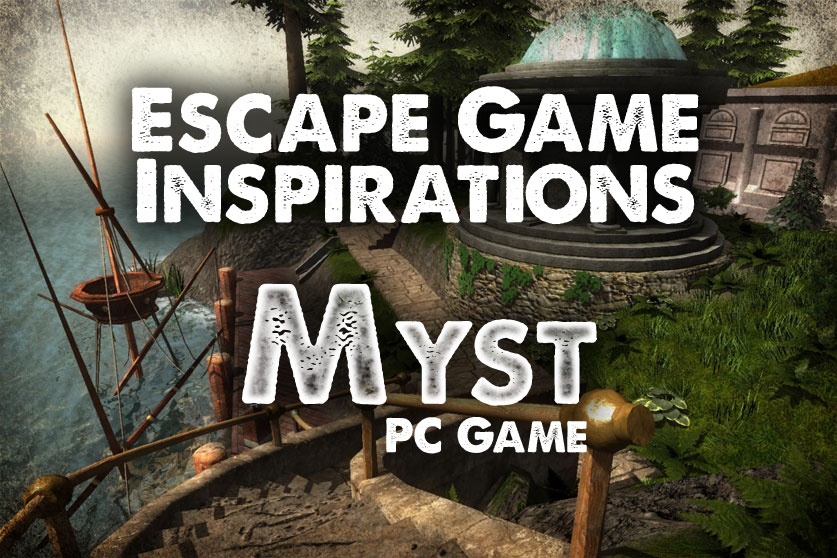 Welcome to a series of posts I am dedicating to the many things in my life that I have drawn upon for inspiration in my escape room game designs. It was a really hard list to nail down, and I may end up updating it as I write these. I felt it would be a good idea to share the many games, movies, and life experiences that rattle around in my head when I start to draft out a puzzle. This list may just end up becoming another breadcrumb trail I can meander down when I am seeking the ever elusive spark that generates an interesting puzzle.

The Game Of The Year

I used to hang out in the weirdest places when I was a kid. My after school hang out for my sophomore year in high school was a small software store in San Jose California called Egghead software. You may know it by it's current name, Newegg.com. Well, before it was a huge website, it was nerd paradise of the brick and mortar variety. At the time, the only computer I had was a Apple Macintosh Plus. This thing had no hard drive, no color monitor, and less RAM than a baloney sandwich. I loved it, but gaming on it sucked. To get my game on, I needed to visit Egghead. I would ride my bike every day after school to the store and play games on their demo computers. The employees all knew me. I was the kid. Seriously, no one under 20 came into that place except me. I also seemed to be the only person in that place that knew anything about Macs. Now that I think about it, they should have paid me a commission. I sold the heck out of that single shelf that was their extensive Mac library.

One day, I came into the shop after wasting all my change on the Street Fighter 2 machine at the liquor store next door. The demo Mac was on in the corner of the store. Which is weird because I was the only one who ever turned it on. I am pretty sure the employees hated it because it wasn't DOS and the weird one button clicky box next to the keyboard scared them. Not only was it on, but one of the employees was playing a game on it! I walked over in disbelief and sure enough, the guy was clicking his way through a weird island of still pictures and the occasional small animation to convince you it was more than a slideshow. I was mesmerised by the concept of the game. There was a minimal story and really no direction at all. It was marvelous. After a while of aimlessly clicking around, the employee got frustrated and got up from my chair. It was mine. They bought it with the commission money they denied me my whole stint there.

I sat down at the game and wandered the bleak landscape of the island. It was pure mystery. I had no clue what the premise of the game was. I quickly found the books in the library and the two pissed off sons. Soon I found another book that linked to another island. The game refers to them as ages. These ages were basically escape games. You could escape an age using the Myst book at anytime but you needed the figure out the logical progression of an age to solve the age and return to Myst. Once you have solved all the ages, collected all the pages, and returned to Myst, were you given the final puzzle. This really was just a choice. You could choose to free one brother or the other. Throughout the ages were hints and clues about the story. If you paid attention, then you would know what to do at the end. Spoiler alert. Both those guys were total jerk bags and had trapped their dad in a book hidden behind the fireplace.

Anyways, the game was freaking awesome. I played it everyday straight for months after that. I beat the game in a weekend mind you. I played the game over and over for months. I partially did it because I loved the game but I also did it because there was always someone in the store that wanted me to show them how to beat parts of it. The puzzles were fun, but not particularly hard by any means. This did not stop the fact that the general public was crazy terrible at it. There was always someone who wanted to know how I ever figured out how to turn the 3 levers the right way even though the clear directions were posted on a wall 2 clicks away! I am pretty sure I was the only one for months that knew the father even existed all squirreled away in the green book everyone was afraid to click on.

That game created a genre. It was a first person puzzle point and click game. I was in love and bought every title that remotely tried to emulate it. I had to. The sequel: Riven, took Cyan like 4 years to release! I remember coming into the game store while I was in college and buying Riven. The clerk said he would give me my money back if I beat it in one day. Suffice it to say, I did not get any sleep that night, skipped class the next day and almost lost my job. I did get my money back though. Then I bought the game again like an idiot. I love that series.

The parts of the games that impressed me the most were the engaging worlds. Holy crap, the story is expansive. I still know some of the D'ni language that is never really spoke until the later games. I can even count in their complex base 25 numbering system that made Riven stupid hard. I have even been to an escape room that uses the numbers in a puzzle.

I also loved the art direction in the worlds. There was so much character in each of the ages of Myst. Every one of them conveying so much depth and mystery. The visual language they use to engage the player is amazingly simple. I always strive to style my environments in such a thoughtful and clean way. I get giddy when a throw switch I built finally clicks into place, or a button console I arrange for a puzzle comes off looking Myst-esque. I still to this day like to think of my escape rooms as ages. If only we could fashion a linking book that can transport you to another world that we have designed. We would never come back.